5 Ways Organizations Can Increase Their Security With Microsoft 365

The sophistication of cyberattacks is increasing, and any organization—no matter how large or small—can become a target.

In the past, Microsoft was known as an enabler of data breaches and other costly incidents due to its lackluster approach to cybersecurity. Anti-virus vendors were comparing the security of the Windows operating system to Swiss cheese, and avoiding Internet Explorer was widely considered to be one of the most important cybersecurity best practices.

Fast forward to today, and Microsoft’s commitment to security is firmly established. More than 50 million subscribers now rely on Microsoft 365, a suite of productivity solutions formerly known as Office 365, to streamline their IT and empower employees to be productive anywhere.

How Microsoft 365 Security Can Become Your Secret Cybersecurity Weapon

Navigating today’s cybersecurity landscape is so difficult that it takes years of experience to avoid making costly mistakes. Most small and medium-sized organizations don’t have the necessary experience, and they can’t afford to hire those who have it as full-time employees.

What they can do instead is to take advantage of managed solutions like Microsoft 365, which are protected by state-of-the-art security infrastructure and managed by leading cybersecurity experts.

Microsoft 365 is a particularly good choice because it comes with a broad range of security features that organizations of all sizes can use to effectively protect themselves against all kinds of cyber threats. Let’s take a closer look at five of them.

At the heart of Microsoft 365 cybersecurity defenses is Microsoft Defender for Business, an endpoint security solution designed specifically to meet the needs of small and medium-sized organizations.

Despite boasting so many advanced capabilities, Microsoft Defender for Business offers a simplified onboarding process, and its administration is so easy that no specialized knowledge is required for organizations to accurately evaluate their cybersecurity posture thanks to features like Microsoft 365 Secure Score.

It’s estimated that around 91 percent of cyber attacks begin with a phishing email. Typically, the goal of a phishing email is to convince the victim to click on a link leading to a fake website or download an attachment infected with malware. 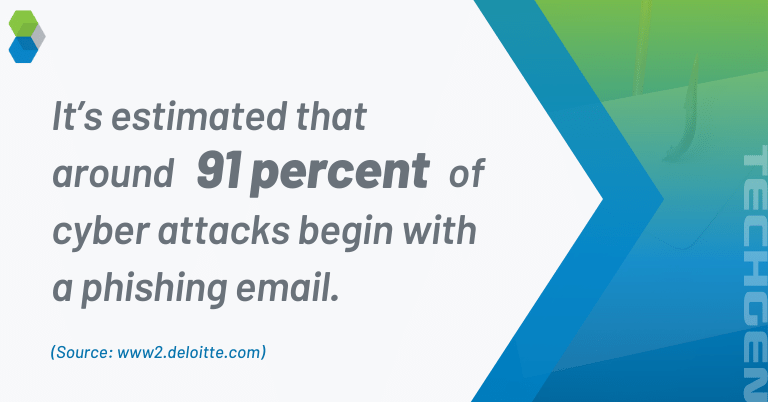 Organizations of all sizes are switching to hybrid work to increase productivity and employee satisfaction. But when employees are allowed to work from different locations, using both work-issued and personal devices, identity and access management becomes a real challenge.

With Azure AD, it’s easy to ensure that only the right people have access to the right resources at the right time—regardless of if they work from the office or their homes. When configured correctly, Azure AD can guard against 99.9 percent of cybersecurity attacks.

Email remains the main communication channel that organizations use when communicating internally and with customers. The problem with email is that it wasn’t designed with security in mind.

Fortunately for all users of Outlook for Microsoft 365, Microsoft 365 supports multiple encryption options to protect sensitive email messages both in transit and at rest.

For example, organizations can set up Microsoft Purview Message Encryption to share protected emails with anyone on any device—even those who use third-party email services like Gmail or AOL. All stored emails are automatically BitLocker-encrypted, so even Microsoft doesn’t have access to them.

Ransomware is one of the most dangerous cyber threats out there. The total average cost of a ransomware attack reached $4.62 million in 2021, the highest it has ever been.

Organizations that use Microsoft 365 are protected against ransomware in several different ways. The included anti-malware software prevents ransomware from reaching target devices, while SharePoint Online and OneDrive for Business have built-in recovery features that make it possible for organizations to restore previous versions of encrypted files and resume operation as soon as possible.

These useful ransomware protection features also extend to Microsoft Teams, which stores user files in either SharePoint Online or OneDrive for Business.

Increase Your Security With Microsoft 365 Now

Regardless of if your organization already depends on Microsoft’s products or is just considering making the switch, there are many ways you can increase your security with Microsoft 365.