Small Business Dilemma: Should I Upgrade to Windows 10 From Windows 7?

Microsoft is retiring Windows 7 soon, and small businesses still using it are risking data breaches and deteriorating performance. Waiting until the last minute to upgrade to Windows 10 from Windows 7 could be risky. Instead, discover a smarter way to handle this and future upgrades.

I completely understand why you might still be running Windows 7 for your business. It’s been a solid product for many years, and it’s actually still used more than Windows 10. But I’ve been urging clients who still have Windows 7 to upgrade to Windows 10 before it’s too late.

First, I’ll tell you the why behind my recommendation, and then I’ll explain how to make future software and hardware upgrades a smooth and productive process through IT Lifecycle Management.

January 14, 2020 has Hackers Licking Their Chops 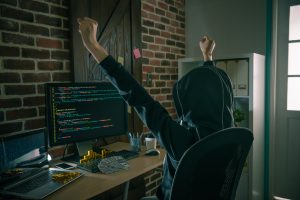 After that date, Microsoft will not be releasing Windows 7 security patches. So if you’re still using Windows 7 after that point, you’re basically saying to hackers, “Hey! The back door’s open and my customers’ and employees’ sensitive data is hidden behind the sofa!”

In May 2017, a ransomware attack called “Wannacry” spread around the world within hours, and was especially damaging to European hospital systems. It was targeted at users of Windows XP, which Microsoft had stopped supporting a few years earlier.

But hackers probably won’t wait years to go after Windows 7. Why take the risk? 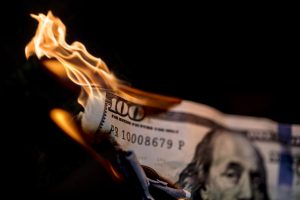 You may have heard that Microsoft is going to offer an extended service program for Windows 7 users. That’s true — kinda. Microsoft announced in a September blog post that it would sell a Windows 7 Extended Security Updates service through January 2023.

However, this service will be sold only to customers who have “volume licensing” deals on Windows 7 Professional or Enterprise. It will be sold on a per-device basis and the price will increase each year. In other words, as this Forbes article confirms, it’s not for SMBs like us.

I’ve led a great many Windows operating system upgrades for small businesses, and I can tell you this: It’s critical to test your existing software and hardware with a new operating system before fully transitioning your business. 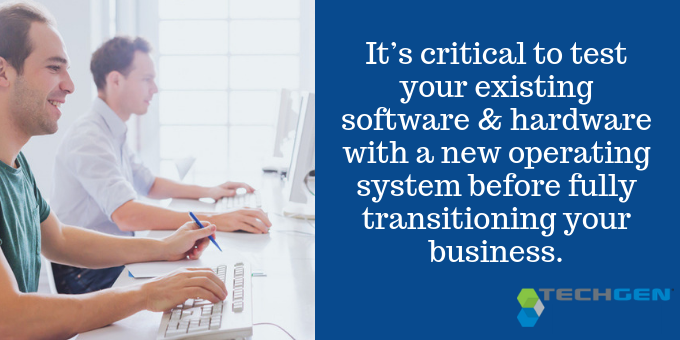 What if your accounting software, for example, or a critical customer-facing program such as a payment system, won’t work correctly right out of the gate with Windows 10 or Windows 10 Pro?

You need to test these things and make adjustments so the migration goes smoothly, without interrupting service to your customers or making it difficult for your employees to accomplish their work.

Another potential drag on productivity and customer service is the learning curve for a new operating system. Give yourself enough time for training after the software/hardware testing and adjustment phase.

The Smarter Approach to Upgrades: IT Lifecycle Management

Windows 7 is nine years old now, so even if you’re on the second round of PCs running that operating system, those machines are probably three to five years old. To take full advantage of upgrading to Windows 10, it’s probably time to swap those older units out. 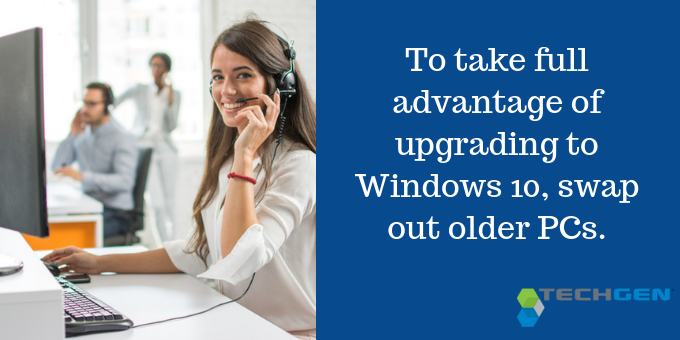 If you and your employees have noticed older PCs getting slower, buggier, and more expensive to maintain, you won’t be surprised by the results of a 2018 survey from Techaisle, a global SMB IT market research firm.

Microsoft summed up the results in a news release:

The study, which surveyed 2,156 SMB organizations across Asia Pacific, found that the cost of keeping a PC more than four years old is US$2,736 per device — enough to replace the ageing hardware with two or more new PCs.

Techaisle broke down the additional cost of older PCs into repair and maintenance plus lost productivity. Here’s what that breakdown looks like:

Cost of Owning an Older PC

I understand it can be difficult to pull the trigger on the expense of new hardware. The best way to avoid a company-wide PC upgrade is IT Lifecycle Management. This is a cost-effective, business-savvy IT strategy that encompasses hardware and software.

IT Lifecycle Management can work in many different ways, depending on your business’s needs, but here are the six basic steps:

1. Inventory your existing hardware and software

When TechGen begins working with a new client, this is one of the first things we do. A thorough inventory includes software version numbers, extended service agreements, and hardware serial numbers and warranties, among other details that help us track these items.

Set a goal to replace hardware at regular intervals. I recommend to replace PCs every three to five years for most SMBs. Most business-grade hardware has a three-year warranty, after which your maintenance and repair costs could spike.

Some TechGen clients spread out the cost of replacing machines by leasing them on a three-year cycle, so the PCs are never out of warranty.

3. Set up a reminder system

You can use a spreadsheet and a calendaring tool, or outsource this process to your IT services provider. You should be notified as machines near their target retirement date. Include periodic reminders to check whether new software versions have been released.

When possible, set up retirement dates for only a small group of PCs per year. This makes the next step MUCH easier.

5. Include replacement allowances in your annual budget

This management technique only works if you actually have the money to buy new stuff when the time comes. IT Lifecycle Management helps prime your budget for these expenditures in three ways:

6. Keep some “retired” PCs as backups 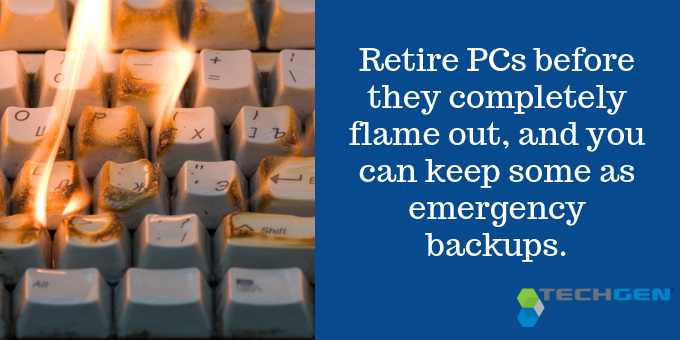 By retiring PCs before they completely flame out, you can keep some as emergency backups. It’s best to keep these spares loaded with up-to-date software, so if a key PC goes down unexpectedly, the user can be up and running again quickly.

You probably already perform a smaller scale of IT Lifecycle Management with your smartphone. Those of us who rely heavily on this device for our businesses tend to replace them every couple of years or even sooner.

We do it for many of the same reasons that I propose replacing PCs every three to five years: expiring warranties; slower performance as we add improved features and apps; and the latest hardware’s improved functionality, connectivity and speed.

In short, newer phones can make us better at our jobs. IT Lifestyle Management takes this concept to a higher operational level — with a lower stress level — for your whole company. 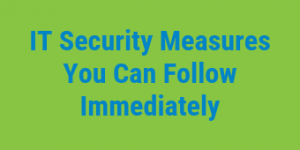